In a previous post, we detailed a vulnerability in the Amlogic System-On-Chip bootROM that allows arbitrary code execution at EL3. Since the Chromecast with Google TV (CCwGTV) is one of the devices affected by this issue, it opens the possibility to run a custom OS like Ubuntu.

This post describes the journey to boot Ubuntu on CCwGTV starting from arbitrary code execution in its bootROM. All the resources (bootloaders/tools/scripts) are available on GitHub, as well as a step-by-step guide.

You are solely responsible for any damage caused to your hardware/software/keys/DRM licences/warranty/data/cat/etc...

CCwGTV, released on September 30th 2020, is based on the Amlogic S905D3 System-on-Chip and runs Android OS. The objective is to boot Ubuntu instead, and doing so from an USB drive to keep the original OS untouched.

The device implements Secure Boot, which means each software component of the boot chain is digitally signed to prevent non-official code execution. In order to boot a custom OS like Ubuntu, we'll rely on the bootROM vulnerability to break the Secure Boot and run custom code via the USB interface.

Google has released Open Source code of U-Boot and Linux for this device, which is very helpful for this project.

The boot chain of this device is based on ARM Trusted Firmware (ATF). In this design, the boot flow is divided in 5 steps executed one after another :

The first stage of the boot flow, referred to as BL1, is the SoC bootROM. All firmware images for the next stages are stored in the bootloader partition on the internal flash memory. The last stage, referred to as BL33, is the U-Boot image; unique Open Source firmware in this boot chain.

Using the vulnerability, we can exploit BL1 to run arbitrary code as BL2 stage. But we can't just run U-Boot as a BL2 image: all the firmwares are required to properly initialize the board (PLL, clocks, DDR training, ...). So we have to load all the firmwares, and only replace the last one (BL33) with our custom U-Boot image.

Fortunately, the entire boot chain is designed to support loading over USB : if BL2 image detects that it has been loaded (in SRAM) via USB, it loads all the next stages (BL3x) over USB instead of the internal eMMC storage memory. The host-side tool to send the bootloaders via USB is even provided by Khadas.

Getting the firmware : the hard way

When I started this research, no firmware or update files were available to download. So I had to remove the eMMC flash chip to dump the firmware and get a copy of the bootloader partition. 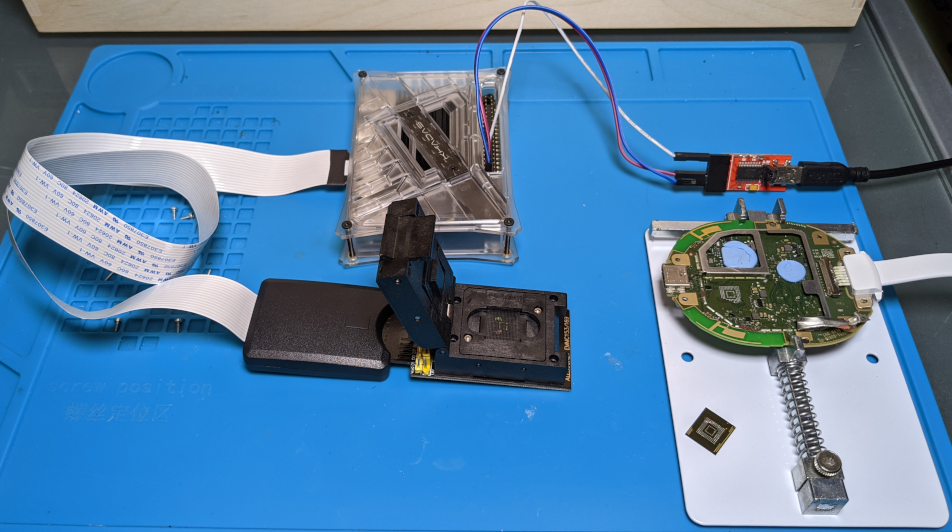 I used a YIHUA 8786D hot air rework station to remove the chip, and a ALLSOCKET eMMC153/169-SD Adapter to dump its content. Since it was my first attempt at eMMC chip-off technique, I followed the instructions given in a great talk from Exploitee.rs at Black Hat 2017.

Later on, few OTA update files appeared online, so this hardware modification is no longer required to get the bootloader partition image.

The exploitation tool amlogic-usbdl allows us to load BL2 image in SRAM and execute it without signature check. However, the bootROM exploitation leaves the USB controller in an invalid state, and this will prevent U-Boot from using it.

So we need a payload that restores the USB controller state before jumping to BL2 image :

Function _dwc_pcd_irq is the USB interruption handler implemented in the bootROM USB stack. When the bootROM vulnerability is exploited, the code flow is diverted from this function, which obviously prevents USB events to be fully and properly handled. Luckily for us, executing that USB handler a couple of times is enough to restore USB controller state.

This payload is copied at the beginning of the BL2 image. The data overwritten are headers that aren't used because the exploit jumps directly to this payload, which then jumps to BL2 entrypoint.

As previously mentioned, we use the exploitation tool amlogic-usbdl to load and run BL2 image. But the original BL2 image implements few features we must first disable to boot properly. This is where it gets dirty. We are free to modify BL2 code because it's signature won't be checked.

Once loaded via USB and run, the BL2 code expects to receive the rest of the boot chain. If Secure Boot is enabled, BL2 checks the signature of all images including BL33 (U-Boot). We don't have the right key to sign our custom BL33 image, therefore we need to disable the BL33 signature check. We modify BL2 code to ignore the result of the signature check on BL33 image :

Anti-rollback (ARB) feature prevents execution of firmware images older than a specific version, which is stored in One Time Programmable (OTP a.k.a. efuses) memory. When firmware images are updated to a higher ARB version number, the OTP version is bumped-up by burning additional efuses.

So two kind of issues could arise depending on the bootloader version we run :

In order to prevent such issues, we picked the oldest bootloader partition available (factory firmware), and we disable ARB feature in BL2 code :

We remove 0x100 bytes of padding at the end of the BL2 image (original size is 0x10000 bytes) to comply with the 0xFF00 bytes payload size limit imposed by the exploitation tool.

Unlike BL2, BL33 is based on Open Source software U-Boot, so building & customizing it is pretty straightforward.

U-Boot boot sequence is defined with a scripting language that supports variables (global, local), control structures (if, while, etc...), and commands. We modify the original script that boots from internal eMMC to instead load and run another script named s905_autoscript from an USB drive :

By loading and running a script from an external media, we have the possibility to change the boot script without recompiling U-Boot or repacking the bootloader image.

Just like other bootloaders in the chain, U-Boot detects if it's been loaded from USB. In such case, U-Boot skips the normal boot sequence and starts an USB recovery interface (a.k.a. USB burning mode) instead. We have to disable that behavior to ensure the boot sequence we just modified is run :

Nevertheless, this recovery interface can still be useful in some cases, so we repurpose the physical button GPIOAO_10 :

When the physical button is hold while U-Boot starts, the USB recovery interface is started by executing U-Boot command "update".

U-Boot source tree with these modifications is available on GitHub, as well as building instructions in the README file. A prebuilt image is also available.

Ideally, we would write a complete (un)packing tool with encryption/compression support for the bootloader partition. It didn't happen. Instead, we'll hack it quick 'n dirty. The following steps are implemented in script repack_bootloader.sh.

By analyzing the bootROM, we learn that the bootloader partition is encrypted with AES-256-CBC and the key is stored at address 0xFFFE0020. This key can be dumped using the exploitation tool amlogic-usbdl with the memdump_over_usb payload. We can then use OpenSSL to decrypt the bootloader :

Compressed BL33 image starts with a magic value LZ4C. Thanks to this marker, we can identify the BL33 image offset in the bootloader partition, and simply overwrite it with our custom, compressed BL33 u-boot.enc :

With our customized bootchain ready to boot from USB, it's time to prepare the OS on an USB flash drive.

First, we write a preinstalled image of Ubuntu for ARM64 on the USB flash drive :

Then, we add few files in boot partition :

Precompiled files and detailed instructions are available on GitHub.

We can finally boot Ubuntu from the USB flash drive by following these steps :

Since CCwGTV only offers a single USB-C port, we also need an USB-C adapter that splits power and data, so we can connect simultaneously a power source and an USB device.

Detailed instructions are available in the README file on GitHub, along with all the resources (bootloaders/tools/scripts).

Due to a bootROM vulnerability, the entire software stack of CCwGTV can be replaced. This means booting an alternative OS like Ubuntu is theoretically possible. But in practice, replacing proprietary software components (like bootloaders or TEE) requires significant engineering efforts, especially without debugging capabilities.

Instead, we preferred to reuse as many original software components as possible, which we minimally modified to boot a custom OS.

As explained in the previous blog post, the vulnerability has since been mitigated with a software update. It doesn't fix the bug, as bootROM is read-only. But, luckily, the SoC allows OEMs to restrict access to the USB download mode by burning eFuses. This software update burns eFuses to make the vulnerable code inaccessible to attackers.

However, once in possession of a vulnerable device (unpatched eFuses), attackers can modify software updates before applying them to neutralize the eFuse patch. Therefore, they can run an official up-to-date OS while keeping the vulnerable USB download mode accessible for exploitation.

This issue is serious for devices like CCwGTV that are supposed to guarantee a Trusted Execution Environment for DRM. Once root-of-trust has been compromised, restoring it is a difficult challenge for OEMs.